Starting as an ambitious pilot programme,  SPICE members were offered the opportunity to learn to play ice hockey under the watchful eye of two Slough Jets players of the day, Michael Bowman and Paddy Ward as well as ice hockey player and coach, Nicola Bicknell.

BBC Children in Need supported our proposal and we were able to fund essential hockey equipment as well as ice time and tuition costs.

Pictured here are Michael, Paddy, Nicola and Ricci with some of the original members back in 2006.

Move on five years later to April 2011 and members of the SPICE Jets took part in the Special Hockey International tournament in Boston, MA.  To fund raise £25,000 for the trip was a massive commitment and achievement. The trip was a resounding success and the SPICE Jets came back to the UK as a fully fledged team. 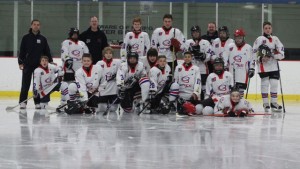 On to 2012, two teams of SPICE Jets took part in the SHI tournament in Bracknell where teams from Canada and USA played against SPICE Jets and the Werewolves of London. Being able to field two teams just showed how the ice hockey programme has grown so much over the years and is now an integral part of the SPICE offering.  Under the SHI rules, all members are able to take part, which is something that SPICE Chair, Ricci Hodgson applauds. “Many of our players are very competent however for me it’s all about inclusion, giving all our members the opportunity to have a go. SHI allows us the opportunity through the level system to invite all our players to train and take part in the annual tournament – it’s a fantastic system and we have witnessed so many positive outcomes both from ability development, inclusion and sense of achievement and accomplishment.”

In 2015, sixty eight members and parents of the SPICE Jets returned from a successful trip to Ottawa in Canada. What a trip! We all played some great hockey as well as taking in the scenes of Ottawa. We even got to see the Sens play the Boston Bruins!! 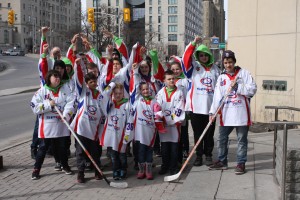 For 2017, two teams of SPICE JETS took part in the Special Hockey tournament in Peterborough, Canada. We all had a fantastic experience and were made to feel really welcome by both the hockey playing community and the people of Canada in general!

In March 2019, two teams of SPICE JETS and a total of sixty-seven people travelled to Toronto to take part in the 25th anniversary Special Hockey tournament. We had an awesome time and our players skated their hearts out, winning six of their eight games! Friendships were formed and strengthened and the self-esteem of our members went through the roof as they proved to themselves and everyone around us, that they can do it!! Check out this short video that gives a flavour of the trip.